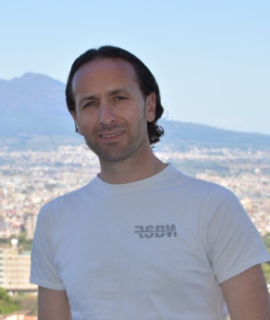 Vesuvius in southern Italy dominates the landscape of Napoli Gulf with its distinguishable grey bare slopes, exposed to continuous surface erosion processes and rock falls which have been hindering the development of the vegetation after the last volcanic eruptions (occurred in 1944). In the last 74 years the development of the vegetation became evident along some portions of the Grand Cone. This process is facilitated by the upslope expansion of the Genista etnensis (Raf.) DC. (Fabaceae), a vascular plant endemic of the Mt. Etna (Sicily) and of Eastern Sardinia, which has been imported to Mt. Vesuvius in 1906 as part of a reforestation program of the Vesuvius slopes. In the present multidisciplinary study we investigated the impact of this exotic nitrogen-fixing shrub, on pioneer plant community of the Vesuvius, also in light of current and predicted climatic changes. Therefore, an intensive field investigation has been designed to explore the eco-hydrological conditions facilitating the expansion of the G. etnensis. Plant species and soils have been collected both underneath and outside the cover of G. etnensis canopies to gather relevant information about the interaction of the G. etnensis with the other species as well as to explore the small scale spatial gradients of soil fertility induced by the G. etnensis. Two permanent stations have been installed to monitor the differences in soil water content, soil temperature and air temperature between inside and outside the canopy cover. We observed dramatic effects on plant diversity and distribution of the invaded ecosystem, mediated by the canopy of G. etnensis. However, the capability of this nitrogen-fixing plant to facilitate heterospecifics showed a clear ontogenetic shift, modulated by plant age and size. The collected data evidence that G. etnensis tends to create an island of fertility by increasing the organic matter content in the soil and improving the soil water retention properties. Moreover, the G. etnensis mitigates the daily soil temperature excursions, reducing the exposure of seeds to extremely high temperature values, particularly during the growing season, and the direct soil evaporation loss. These results suggest that the invasion of G. etnensis can promote alternative successional trajectories that may dramatically affects vegetation dynamics. These data show that the translocations of native plants within the Italian territory can induce negative changes to the environment and to the communities. Therefore, the information obtained in this research are useful to identify specific management practices that can limit the spread and impact of this species.

I’m Postdoctoral Researcher on “Analysis of plant biodiversity and fuel in experimental areas of prescribed fire” at the University of Campania Luigi Vanvitelli (Caserta, Italy). Previously, I’m graduated in Agricultural Sciences and Ph.D. in Development and Management of Agricultural Resources and Forests at the University of Naples Federico II (Italy). I am a botanist and ecologist and my main areas of interest are floristics, plant taxonomy, vegetation science, community ecology, plant biology, biogeography, fire ecology, biodeteriogenic plants on monuments and archaeological sites, plant biodiversity assessment and conservation. I am also involved in several national and international research projects dealing with red lists, effects of climate change on alpine plant species, plant traits, ethnobotany, archaeobotanical reconstructions and plant eco-physiology