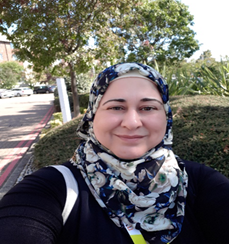 Ruta graveolens is part of the Ruta family, widely known as the common Rue. It is a medicinal and culinary plant, commonly grown as an ornamental plant as well as medicinal herb. It is native to the Balkan Peninsula but is now grown in gardens throughout the world. Jarash and Ajloun are two different geographical and environmental areas in northern Jordan. The objective of this study is to determine the optimal environment for R. graveolens cultivation based on growth and metabolic assessment. Random collection of samples of R. graveolens from areas within Jarash and Ajloun were collected. Two areas within Ajloun (Ajolun A and B) and two areas within Jarash (Jarash A and B) were chosen based on how well they represented the diversity of environmental conditions. Shoot tissues were used to determine the MDA level as an indication of ROS, chlorophyll content, GABA metabolite accumulation level, total carbohydrates and protein levels. Data showed that Ajloun A has the highest carbohydrate level, while Jarash B and Ajloun B exhibit slightly elevated levels of MDA in comparison with the remaining two areas. Jarash B containing the lowest concentrations of proteins which explained by the direct sunlight and ample rainfall it receives. Ajloun B contains higher amounts of protein despite similar rainfall due to its blotched sunlight. High GABA level were detected in Ajloun B in comparison to all three remaining areas. Chlorophyll concentration were significantly varied between the four locations with higher level of chlorophyll a in Jarash areas compared to Ajloun areas. Data indicated that different environmental condition alters the Ruta graveolens metabolic stabilization in term of C:N balance related to protein, carbohydrates and GABA shunt metabolic pathways.