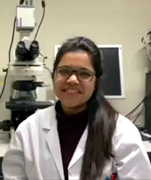 Title : A step toward preventing Oomycete’s infection through the modification of electric fields on a microfluidic device

The oomycete Phytophthora can cause serious threats to native flora and agriculture and food biosecurity, causing devastating diseases to plants such as kauri, oak, avocado. In New Zealand, Phytophthora agathidicida is the causative agent in kauri dieback and is receiving much coverage in the mainstream press as it can kill a mature kauri tree within two years. These organisms can infect their host plants via motile zoospores. These can travel between sites of infection via water in the soil.

So far, the research focused on mimicking the natural environment around the roots of the plant using microfluidic Lab-on-a-Chip (LOC) devices to investigate the electrical parameters that allow zoospores to infect plant roots. LOC devices can contain channels and chambers that allow the growth of microorganisms and the applications of physical and chemical factors. The optical properties of the devices allow me to monitor the growth and behaviour of the microorganisms in response to these factors. Plant roots can generate electric fields, which may attract zoospores. Different LOC devices have been designed that contain anodes and cathodes, which enable the study of the swimming behaviour of Phytophthora zoospores in the presence of different strength electric fields. Experimental result shows that zoospores tend to swim preferentially towards and then aggregate close to the cathode. These zoospores encyst and germinate, and the resultant germ tube shows chemotactic growth, also toward the cathode.

Modification of these devices will allow concurrent measurement of electro-tactic and chemotactic responses. These new devices will incorporate channels that allow the application of plant cell wall extracts, in addition to the applied electric fields. What will the response of the zoospores be, for example, if the wall extracts are applied close to the cathode – will the zoospores be more attracted to the electrical or the chemical stimulus? This research will help address the question of what the primary attractant directs infectious zoospores towards the roots of a plant. It will help in developing techniques to prevent infection. For example, if the electric fields were the primary attractant, it may be possible to design small field-based devices that are able to modify electric fields around vulnerable plants and attract zoospores away from roots and thus reduce their infective capability.

Debolina Sarkar, Doctor of Philosophy, received a bachelor’s degree in Science from the Department of Microbiology, Calcutta University, India, in 2015, and a master’s degree in Microbiology from the University of Pune India, in 2017. She did her master project on determining the antioxidant and anti-microbial property of Piper cubeba. She is currently enrolled as a PhD researcher in the School of Biological Sciences, University of Canterbury, New Zealand. Her work focuses on the microfabrication of Lab-on-a-Chip devices to study the movement of Phytophthora zoospores under the influence of electric fields and to investigate means of stopping their movement.